Book Review: Sparrow Squadron by DL Jung | A Blog Tour Palooza, Flying Planes over Russia, and Fueling My Addiction for Anything and Everything World War II

Today, I have a blog tour review for Sparrow Squadron by DL Jung. I have written a review to peak some of your interests, an introduction to Dl Jung and his work, and a giveaway, which has kindly been done through YA Bound Blog Tours and the author, for each of you to try your luck at. I hope you all enjoy; however, as I am probably getting your hopes up(as my reviews are always promised to be super good), I will begin...NOW!

World War II. June 1941. Hitler's war machine turns to the Soviet Union.Escaping her hometown ahead of the Nazis, 16-year-old Aelya Makarova seizes a chance to live her dream. Obsessed with flying, she joins a women's fighter squadron to defend her homeland against the invaders. She'll go faster and higher than she's ever gone before.But the harsh reality of Air Force life shatters her expectations and forces her to grow up fast. The squadron is split by petty rivalries, male pilots treat them like a joke, and the ideal country she thought she was fighting for doesn't really exist.Finally given a chance to prove herself in battle, Aelya is pushed to breaking point. With all her talent, the help of her comrades, and a lot of luck, she might just make it through. But will there be anything left of her humanity?With fast-paced action and a heart-rending mix of humour and tragedy, Sparrow Squadron is an adventure novel for young adults that brings an overlooked episode of history to life.

First, I have always been interested in stories from World War II. I am not sure why, but it has always been an interest of mine to find novels that can depict this time period the best. World War II was a time of suffering for a lot of people, and getting to see exactly that and how people tried to stop the war showed me how brave an individual soldier could be, specifically a fighter pilot. Aeyla Makarova, the main character, departs on a journey in her plane to keep the German from attacking her country Russia. She has always wanted to fly, and when she gets a chance to fly for her country, is ecstatic. Seeing a character take her favorite hobby and turn it into a job is really cool as I have turned writing, an activity that I did not know that I loved a lot, into a hobby. Since she is an advocate for flying, an activity she enjoys so much that she will stand up to her mentors to get a position, I related to her so much; however, I will never be as good at blogging as she is at flying.

Next, I really enjoyed the story. I found the settings of the different bases to be interesting as I had to learn new sets of protocol and rules, which always interest me. Maybe this may be a reason why I always read every single word of a contract before I press "accept." Anyway, I really enjoyed learning more about airfare, especially since I just wrote my review for Kitty Hawk and the Curse of the Yukon Gold. Also, along with the flying and taking down German Nazi soldiers, there are also some feminist vibes, which are done perfectly. The story, along with the characters, show off what women could do in times of need, such as a war, even with people telling them "no."

Along with Aeyla, I found the rest of the characters to be awesome. They each held onto their beliefs throughout their hardships in the war and stayed true to themselves. They each believed that although they were women, they could do anything they want to accomplish, which I believe is good message to send to any female readers. Reading something that shows that a person, not depending on gender, can do anything that he/she/they puts their mind to is an important thing that Jung has done. However, although I may have enjoyed the characters and their personalities, I got annoyed by a character that comes into play about a third of the way through. Roza is an arrogant and selfish character. She is very motivated to fly and can be overly competitive when flying, which causes her to act out and start fights with the other pilots. It seemed as if she had gotten some steroids or something as she was just mad and passive aggressive all. The. TIME! I think she was just put in here to make mine and other's emotions rattled. Also, speaking of characters, there were too many introduced. There are so many names, and some of the characters just leave, never to be read of again. It's hard to keep track of each and every character especially when I am trying to concentrate on Aeyla's journey.

Also, although I may have enjoyed most of the story, I felt as if it was told very slowly. I would be reading throughout the day or throughout the night and I would find myself falling asleep, barely following along, or wanting to read another book. I think the problem was that there was a huge info-dump with information about the war and learning about the newly introduced characters after every few chapters. I think later on throughout the other books in this series there will be less of an info-dump as this book was set up as the foundation for the series.

I definitely do think this story by DL Jung is written well and can be read from many ages. I would just advise those who do not enjoy a slow-paced story to pick this book up with caution.

*Received a free copy from YA Bound Book Tours and DL Jung in exchange for a honest review.

Darius (DL) Jung has been an enthusiastic student of history since grade school, when he spent lazy afternoons flipping through an old Encyclopedia Britannica set. He enjoys blogging about history and writing historical fiction. He also writes fantasy and horror fiction.

His first novel, Sparrow Squadron, is a YA historical action-adventure based on the true story of female fighter pilots flying in combat for the Soviet Union during World War II. It's available now in e-book and coming soon as a paperback. It is the first book in the AELITA'S WAR TRILOGY.

Jung is married, with two children, and lives in Toronto, Canada. They are lucky enough to spend part of the time in New Zealand. Outside of writing, he has tried stints as an industrial engineer, a film and TV script supervisor, an IT consultant, a professional game show contestant, and a grossly under-qualified business wear model.

For news, artwork and bonus material for his novels, visit Darius at www.dariusjung.com.

You can also find some of Darius's stories on his website and on Wattpad.

Now, for the most important part of them all: the giveaway! Woohoo! After reading all of that, especially my terribly written review, you deserves to try your chance to win one of five Amazon $10 gift cards. Enjoy, and good luck!

Thank you for reading, and I hope you enjoy your day!

Are you thinking of reading this? Do you have a favorite time period in history? Do you like to make paper airplanes and fly them around to annoy the people around you? Do you live in a constant fear of authors adding a humongous amount of characters whom you can share your precious cake with? Chat with me in the comments below or on any of my social medias.

Mini Book Reviews: Gudetama | Stress and Why Books Can Handle It So Much Better Than Mortal Humans

Has it been a while for you since I've posted? Probably not, but that is how I feel today.

After a full day of school, I feel so tired. I am not tired so much in the way that I need to fall asleep in the next minute with drool flowing from my open mouth, but I am tired from feeling stressed out all day. I have been wondering about my final grade for my English test; I have put myself on a reading schedule due to not having read anything for the last two weeks because SCHOOL IS MY LIFE*; I have studied for tests throughout the past two weeks as well. Also, finals is this week, and I am freaking out. There have been many things stressing me, and I am so glad that blogging is not one of them. After a long time of sitting in my carpool's car, I finally arrived home to find a package sitting against my house door. Little did I know that the two books that I requested so long ago would be the ones to pick me up after a stressful couple of weeks. 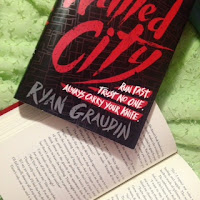 In a real but an unreal city named the Hak Nam Walled City, there live three kids-Jin Lang, Mei Yee, and Dai-surviving in the worst possible situations to fulfill their missions before the Walled City is taken over by outside authorities. In this city, girls are sold into prostitution, crime is high, and cults are formed from the worst individuals. One guy named Longwai basically controls Hak Nam Walled City with his gang of ruthless killers while Jin Lang is on a quest to rescue her sister Mei Yee from the brothel that took her and Dai is finding a way out with the little time time he has left. Dai teams up with both Jin Lang and Mei Lee to get himself and others out of the place they have called home for years, but surviving is the hardest thing to do now that they have started their missions.

First, if you know me, you know I was never the biggest reader until a few years ago. I know. A world in which I am not crazy in love with books is crazy, right?! As the y…
Read more