Book Review: Black Bird of the Gallows by Meg Kassel 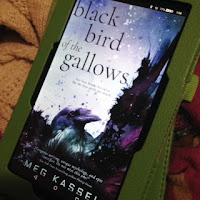 *Received an advance reader copy in exchange for a fair review. This kindness in no way affects my opinions, and this review is honest.


"Reece leans forward, reaches for me, then drops his hand. 'I'd give anything to be a normal boy. To stay. Go to prom with you. But even one of the reasons why I'm drawn to you is because I'm attracted to death.'"
-Meg Kassel, Black Bird of the Gallows

About everyone is afraid of the inevitable death that awaits one, unless if you are a harbringer of death, a beekeeper, or a scarecrow. This whole different world and everyone involved in it is unknown to everyone else until Angie Dovage, an outcast who has a troubled past, a love for music, and an obsession with her new next door neighbor Reece Fernandez, stalks and becomes a friend to the new guy Reece. With the new harbringer of death in her life, that includes more supernatural creatures like a beekeeper who is trying to bring destruction and chaos to the world and people around him coming after Angie and the ones around. As many disasters follow after one another, Reece starts unveiling everything about his world, and many more things start to become unveiled to Angie and the reader as a tale of adventure comes to play before one's eyes. As worlds collide, no one knows who will survive and who will die due to chaos and destruction beekeepers bring along for the harbringers to eat up. If Angie and Reece can try to save the world, will they be able to survive, too?

First, I really enjoyed reading about the characters, even though they all seem to have tragic pasts, presents, and futures.

1. Angie Dovage
Angie has a tragic past, which includes her dead mother, and a title that follows her everywhere she goes and influences every decision she makes. She is a daughter of a rich man who lives in Pennsylvania and tries to rescue Angie from her past. She is called a freak from the popular kids due to her mysterious past and character, and no one really knows her except for her two closest friends Deno and Lacey. She is also called Sparo when she is doing what she loves, which is music and creating it; however, she only plays by the rules and never does anything original until one point in the book when she realizes she needs to be herself before she regrets not doing it. She was an okay character to read about but she would always care about Reece, what he was doing, who he liked, etc. Although, I did like how she would express herself through music, and when she exposes her identity, I related with her so much since I had just revealed a secret of my own to my family. I had told them, finally, I have a blog about books and my love for them. I also realized along with her that it is good to let go of secrets that can be building up inside of you.

2. Reece Fernandez(or whatever name he chooses)
I did not really enjoy reading about Reece and his whole mysterious, puzzling life Angie was trying to discover. He was always brooding all over the place and was too mysterious for me ever to build a connection with. To me, he seemed to only stick around Angie due to her tragic past and her mother's death, which she suffered through. Also, he was always holding back information from her when Angie really needed to know it for any catastrophes coming her way. Reece would just hold it off until the disaster had already happened or was happening.  Also, a really big part of his life, other than Angie, is his identity of being a harbringer of death. This means that he feeds off of the energy of death and that he has to move often with his makeshift family due to Beekeepers spreading chaos all over. This information is a lot to get used to since Reece, of course, tells it all at one time, which can be a little overbearing.

Along with many conflicts that intervene with the characters, relationships can either cause fireworks explosions celebrating the new couple or a stupid conflict that breaks up the troubled couple. Who cares if someone has a super cool world and many awesome characters if you have no relationships to cheer for? I would, since I was hoping that no one who I cared about would die. The main romance was Angie and Reece's. I really liked the chemistry they had together and some of the scenes they were in together; but, it was so infuriating reading about them being in the same room, wanting to kiss each other, and the two of them not being able to do anything about it. Also, even though I may have liked their chemistry and their interactions, I may bring more excitement for this couple to the table than I really have. Some scenes of their romantic endeavors made me feel weird and had assured me that the relationship between the two felt forced. Also, it had seemed to be the only relation they could hold with each other, other than never knowing about each other.

In the book, there is an emergency with a shooter near the high school. Everyone is freaking out, people are looking out the windows for a sneak peak, and students are texting everyone they know miscellaneous things. This whole event started because a boy who would never have been thought to be violent in any such way had gotten stung, which makes people turn crazy, by Ralfette, who is the Beekeeper. Even though an accident or something bad was bound to happen, this scene felt rushed and was over too quickly for me to get a good grasp on it since this event was only for Angie to see how stupid she was being about not showing off her talent for music at the local club. Also, in a bad situation, people have the normal reactions: to be scared, emotional, and wanting knowledge about what is happening. However, in this scene, it felt a little overdone or even more exaggerated than how someone would actually act in a situation like this.

Next, there is this one part in the book that I just really need to talk about because I find it so hilarious. Angie is going to watch a movie with Reece and his makeshift family at his house, which is where Reece is supposed to give the readers the information we need to understand what is going on, but runs into Hank, one of Angie's mom's ex-boyfriend and the crow with the one white feather that follows her everywhere, on the way. He tells her all the information Reece should have told us sooner, which is that Reece has had a massive crush on Angie for the longest time and all the troubles happening in Cadence, Pennsylvania at the moment. I find it so hilarious since Hank's transforms into a crow, which is so dramatic that it might as well be the movie. This is my favorite scene of the book, and I am not embarrassed nor is my my pride destroyed.

What I very much like about Black Bird of the Gallows is that it is a fantasy set in the real world. And, it is only three-hundred pages. Some fantasy books can carry on into a big series with several long thousand page books(talking about you Game of Thrones) that carry on forever, but Massel's book is a short, sweet contemporary fantasy-filled book that will leave you feeling satisfied without the longing for a second novel. This book would have been a very nice break from all the long fantasy books I have stacked up that I want to read on my bookshelf if I had not read it already. Eh, you live and you learn.

Finally, for this conclusion, I have basically written myself out in the above paragraphs. The only thing I know what to write is that this book was good, and I will certainly look out for anymore of Meg Kassel's books in the future.