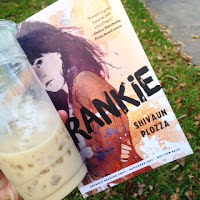 Foreword: Received Frankie by Shivaun Plozza from the publisher in exchange for an honest review.

Frankie is angry. She is suspended from school because she hit a boy with a Shakespeare novel, which may have caused her to repeatedly bite her thumb throughout the novel. Also, she has a half-brother from the mother who left her when she was younger. Although Frankie may be happy when she meets her new brother Xavier, she becomes confused when she finds out Xavier has a troubling, crime-filled life and a gorgeous friend named Nate that catches Frankie's eye. Until Xavier disappears, Frankie believes she could never get away from her life of disappointing her friends and family. Now, she must search for her new brother through dark streets and alley ways while keeping up her daily appearance of cooking kebabs, eating Spanish doughnuts, and trying to be good for school.

Discussion:
*P.S.Get some popcorn ready, as this review is going to be long. 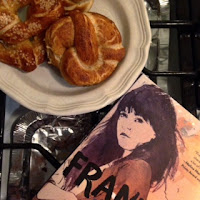 When any author releases their new novel, every reader expects one thing from that book, which ends up being whether the book can be considered good or not. I have always been told to read, read, and read and write, write, and write as I would become a good writer or at least a skeptical reader with lots of experience hoarding and loving books in the future. I do not know if the writer in me is as good as I hope, but the part about me hoarding tons and tons of books is definitely true. Now, what does this tiny little paragraph that I am writing before this review have to do with anything in this book? Shivaun Plozza, a debut author, has written many essays and short stories before finally deciding to write her own story. Whether or not you have been publishing your works before, this takes a lot of guts. One is sending your book, which is basically a baby to the author, out into the harsh world of critics and other readers to judge and decide whether they want to follow a particular author on his or her journey of writing. As I was reading Frankie throughout the two days it took me to read it, I was deciding whether I wanted to follow Plozza through her journey of writing. This lead me to express my decision via my review, which tells my opinions to the world. This begins meow, as there is a cat included in this story!🙀

First, I decided to read Plozza's book as I had gotten an arc from the publisher(😸) and I have never read a book from an Australian author, so diversity is good as this book was set in Melbourne, Australia. Even though this book may have been set Australia, I did not read about anyone putting shrimp on the barbie or any other stereotypical phrases other than everyone calling each other "mate." It was good to see another country through a book, which was told through the author's descriptions and probably her life experiences of walking down an alley way to see some graffiti. Also, I did not see any difference in the cultures between the United States and Australia; however, there are probably differences that were not discussed in this novel. Maybe, next year, I will decide to do a diverse bingo so I can read some more diverse literature.

Next, I will discuss the main characters that influence this novel and the occurrences within it. I, personally, like almost any kind of character I find in a book. They can be the villain(whom for some reason everyone else hates), the anti-hero, the nice one, the mysterious one, or the many others that make the list way too long. However, I cannot deal with the mean girl(sorry not sorry) who only seems to dive people away from her and does not realize it nor does she not respond with anything other than sarcasm and a sharp bite from her tongue. One character with this type of personality would have been more fun(or is it funner)than what actually is presented, but every character was a copycat(🐱=🐱) of each other. Each character was annoyingly mad all the time, annoyingly sarcastic all the time, and snarky, especially Frankie Vega. Among the tower of a list of unlikable qualities she has in common with the other characters, she is also insensitive and rude to the only people who actually care about her. Also, through her time of no school and troubling experiences, she does not act as a very good friend to Cara, the only girl who will speak to Frankie other than Vinnie, Frankie's aunt. This is all I have to write about Frankie before I scream at the walls how much I hate her.

As there are characters and this story is a contemporary, there is most likely a romance in this book. The romance, which was introduced too late to be a real relationship, was terrible. As both characters that take part in the relationship are basically the same character, they are perfect for each other; although, the only thing that keeps them together seems to be their bad tempers, bad pasts, and attachment to Xavier. I hated Nate, the love interest for Frankie, as he was there just to be her love interest. I wish that Nate and Frankie could have just been friends or acquaintances as the romance was introduced too quickly and was weird as they both hate each other throughout the story. How does someone go from hating one person to loving them? However, it may have been that Frankie's obsession over Nate's stupidly blue eyes may have won her over. Also, Dean or whatever his name is comes into the picture as Frankie's ex-boyfriend who wants to get beck together with Frankie. Throughout the book, I was rolling my eyes at the scenes he was in since he has puppy dog eyes directed at Frankie the WHOLE time. I just want a good relationship that develops throughout the book or no romance at all. Is that too much to ask?

Also, while discussing relationships, a platonic relationship occurs in Frankie, and it was good while it lasted. Xavier kind of reminds me of Augustus Waters from The Fault in Our Stars as they both serve a purpose even though they might not exist for the entirety of their books. Xavier had shown Frankie that someone could relate to her as someone who disappoints everyone around him. He also had shown that even though Frankie is Juliet's daughter, she is still worth loving and caring for. Although I may have liked that Xavier was there for a reason, I wish I could have had more development of the relationship as I only read about him at the most two times. Also, his ending was very predictable as after a while no one was seeing him and Frankie wanted to kill him, so he was most likely going to wash up dead. In addition, Frankie had an opportunity to find Xavier right before his end as she heard his voice before she quickly ran away. This relationship was a disappointment as Frankie was supposed to have a person who she could relate to in bad times and as it always nice to have a sibling even if one can be big pain in the butt. In addition, even if my brother is not a con-artist, I am very glad that he is not dead as it would be very sad.

Among the aspects of family and forgiveness in this story, bullying was discussed. Frankie is relentlessly bullied by her peers, such as Scott who is on of the guys who ruined Frankie's life. Frankie does her fair share of bullying too as she wants everyone to feel as angry and hurt as she does. This is not how one should react to being unhappy, but I do like how Plozza had gotten real with her readers to show that this happens in life. Also, throughout the book, I got to read about some of Frankie's past. Even before the Frankie who seems to shield herself with her harsh words, she had gotten subtlety bullied by her mother Juliet and her mother's boyfriends. This was really nice since I could learn more about why Frankie chooses to do what she does.

Finally. I certainly did enjoy Plozza's writing style as it did keep me engaged throughout the story, even though there is a lot of profane language that I cannot speak. She also uses great pacing for the mystery, which I found predictable in the results, concerning the story. Even though I may have enjoyed this story of family, forgiveness, and many other thinks, I am disappointed by what had happened in the beginning. I will still probably follow Plozza's journey through writing as this is only the beginning of a hopefully long time of writing.