Book Review: The War Outside by Monica Hesse | Two Girls, One War, Every Country Against Them

It's 1944, and World War II is raging across Europe and the Pacific. The war seemed far away from Margot in Iowa and Haruko in Colorado--until they were uprooted to dusty Texas, all because of the places their parents once called home: Germany and Japan.Haruko and Margot meet at the high school in Crystal City, a "family internment camp" for those accused of colluding with the enemy. The teens discover that they are polar opposites in so many ways, except for one that seems to override all the others: the camp is changing them, day by day and piece by piece. Haruko finds herself consumed by fear for her soldier brother and distrust of her father, who she knows is keeping something from her. And Margot is doing everything she can to keep her family whole as her mother's health deteriorates and her rational, patriotic father becomes a man who distrusts America and fraternizes with Nazis.With everything around them falling apart, Margot and Haruko find solace in their growing, secret friendship. But in a prison the government has deemed full of spies, can they trust anyone--even each other?


"Horror grows out of humanity. If you are paying attention, it always starts small. We all tell the versions we wish were true." 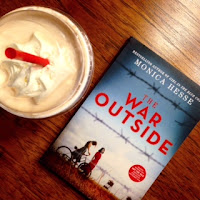 First, this book means a lot to me. I am not Japanese nor am I German. My family comes from Italy and a couple Eastern European countries. I have never been forced to live in an internment camp. I have never been the subject of accused allegations by my government nor have I known anyone personally who has had that happen. I consider myself lucky that I do not live in a time of war when everyone is protecting themselves and their families before anything else. I consider myself lucky that no government officials have come knocking on my door to take me away from my house and family. I consider myself lucky for a lot of things, such as cake and the freedom to read any chemistry or physics textbook I want. This book taught me a lot about my life and others' lives; therefore, I am very excited to be able to write this review!

As this is a novel starring a friendship (that really is a romance since they are always wondering what they are to each other😍), beginning with the characters feels right. The first character introduced is Haruko, a Japanese descendant who is not as excited to go to Crystal City as the rest of her family is. Already, it is known that she wants to erase her heritage as she hates how much discrimination she receives and wants to be called Helen. Throughout the novel, she becomes more comfortable with her heritage as she befriends Margot, the statistic loving and distant German girl who believes she and so many other families like hers were put into Crystal City for the wrong reasons. These two girls, both from different backgrounds and different sides of the camp, form an unlikely friendship that seems to turn into more after each time they spend time together. At first, I was apprehensive about this friendship since both Haruko and Margot are very reserved; however, that immediately changed as the novel proceeded and they became closer. If only I could get a sequel...

Also, the reason why The War Outside is a five star read is because it makes you think. Anyone can read a book and just move on, but there are those special books that make you think. The War Outside is one of those books. It focuses on American citizens that have Japanese and German ancestry can be discriminated against without a second thought in several situations. One of them included two girls drowning and several people accusing the administration of lying. With no second guess, guards and administration believed it was the fault of the German and Japanese prisoners. My thoughts after reading this book circled around the idea that all of this could happen again with same or different races in the same country I call home. It kept me awake for hours, and I am still pondering the "what-ifs" of this occurring once again.

In conclusion, The War Outside is a worthwhile read. It reinforces lessons I already knew by heart and teaches me others that I will always keep with me. Before reading this, I read Farewell to Manazanar, which is another five star read, and I learned about the history of these types of camps. Although Hesse may not center on specific details like Houston in Farewell to Manzanar, she does intertwine the stories of Haruko and Margot magnificently. Also, I am a still confused with my feelings about the ending of this book as it left me pondering the possibilities. The ending is ambiguous, which is something that I usually don't like; however, it worked for this story. Now that I have read The War Outside, I cannot wait to read more of Hesse's works, especially Girl in the Blue Coat.

*Received a free copy from TheNOVL and Little, Brown Books for Young Reader in exchange for a honest review.

Thank you for reading, and I hope you enjoy your day!