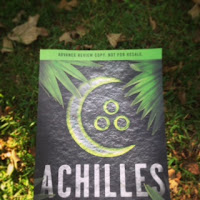 *Received Achilles by Greg Boose from the publisher in exchange for an honest review.

In the future when new worlds are wanting to be discovered, a boy named Jonah is on a flight to Thetis, a newly discovered planet that house humans while Earth is becoming overpopulated. Instead of having the smooth journey the people who signed up for this test expected, it becomes a rocky crash to Achilles, one of Thetis's moons, when the captain gets shot by an unknown enemy. Now, on Achilles, the surviving passengers try to live without the newly missing adults in an unknown world.

As a reader and a human-being, I have my preferences, such as my love for fantasy over contemporary. Also, I like the genre of science fiction with The Martian by Andy Weir being one of my favorites in that genre along with so many others. So, when I first got Achilles, I thought I was really going to enjoy it. Another planet, a promise for action, and a mystery that was told in the official summary of the book sounded really interesting while it lasted. However, this plan was not executed very well in the eighty pages that I read. As for the other qualities of this story, they weren't as great as the concept.

Also, I have been asking why I did not finish this book when I first decided to put Achilles down since I have a hard time leaving books or things in general unfinished. My answer to this question could include many reasons, which I will list.

1. For starters, the characters were very annoying. Especially, the main character Jonah Lincoln got on my nerves so much that I wrote a series of angry letters and notes in my book. In addition, I never annotate my books except for very important reasons, such as correcting a character's character or when something stupid happens. Also, Jonah whines about everything, and he somehow wants to be a hero, but what a terrible hero he is. As I was reading, some statements that the characters said or thoughts going through Jonah's mind seemed to state the most obvious of things. In conclusion, I have so many complaints on the characters conjured for this book, and I could not continue on with the story.
a. Also, there is no diversity with any of the characters either. Every character is Caucasian with the exception for Jonah who is African American and skinny, another factor every character shares. No population that I have seen or heard of is not like Achilles's.

2. Next, Boose seems to have lessen his writing's intelligence "to get across" to his readers. Everyone has read that one or many authors, unless if you only read esteemed writers, who decrease the intelligence of their writing to make sure their audience can understand the point they are trying to convey. Boose is sadly one of these writers. I really wanted to like this book; though, with the terribly developed characters, the slow pace, and the writing style, Achilles could not compete with the other books slowly collecting dust on my bookshelf.

3. Third, this book was so BORING! I can not even begin to tell you how boring it was to read Achilles. I would read a couple pages, get sidetracked, and then I would have to reread what I had read before since I did not remember anything from them. I hate writing it, but the slow pace in this book was as slow as a snail and did not do anything for the books. Books such as Carry On by Rainbow Rowell and The Hobbit by J. R. R. Tolkein have a much slower pace than other books I have read due to world-building; however, I was never bored. I was always wanting to know more. Boose does not give you that feeling in Achilles, so it becomes slow and agonizingly difficult to finish. Lastly, I could say many more things about this book that made it boring, but I would soon find myself repeating information already written.

Even though I may have a lot of complaints, I probably did not read far enough to get a good enough grip on it. It might have been too slow for me to get interested in, but Boose brought in an interesting concept to literature. However, this is the only compliment I can give to Achilles since it was not a great book. Since it is the end of the year, some people may want to read short books that can fulfill their reading goal's requirements; and, I do not recommend this book to anyone no matter what reason one may have since I disliked it so much. However, whatever floats your boat is fine by me.