15 Questions with Lil' Bro: The Heroes of Olympus series by Rick Riordan

April 09, 2018
Hi everyone! I am back from the dead. I dug myself out of my book-made grave and risen up with Clockwork Princess in one hand and my other hand at the ready to type my next post. I feel dead due to all the deadlines that have been punching me in the face; however, as no one probably wants to hear about my bruised yet beautiful face, I think it is time to move on to reviewing a book series. In January, I had my brother tell me his thoughts on the Percy Jackson and the Olympians series through a series of questions. As I like to follow a pattern in my life, except for when it comes down to solving a problem with trigonometry as it is a stinking pile of confusing "math," I chose to be like Vogue and ask my brother, a newfound celebrity, fifteen questions about his so called "favorite series from Riordan yet." 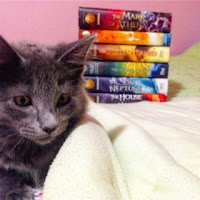 - - -
⭐A key to understanding who is who: Nicole is bold and Nathan is normal, just as it is in real life.

1. What star ratings (out of 5 stars) would you give these books?

The Lost Hero: 4/5- It was slow, I missed Percy, and the characters, except for the great and wonderful Leo Valdez, were annoying.
The Son of Neptune: 4.5/5- PERCY HAS RETURNED! The characters were much better developed. Plus, I did not have to deal with Piper pining over Jason.
The Mark of Athena: 5/5- All the characters reunite, and PERCABETH WAS TOGETHER ONCE MORE! I enjoyed the story and the cliffhanger. Also, Annabeth got to show off her wisdom that she had gotten from her mother.
The House of Hades: 4.5/5- My babies were suffering and I had no Kleenex lotion-infused tissues. I had a runny nose for weeks.(Nicole added the last part for dramatics.)

(<-----Nathan's reaction to everything Nicole does)


The Blood of Olympus: 4/5- I HATE Octavian and the ending as Leo is...UGH! Leo, somehow, is selfish and, at the same time, not as he never wants to confirm an important fact with his friends about an important topic and is not as he helps someone. I do not understand my reasoning!

2. You enjoyed this series more than Percy Jackson and the Olympians. What was so great about this one that made it so much better?
In the Heroes of Olympus, I felt myself more engaged in the story as there was more action and violence. Also, Nicole has made me obsessed with shipping characters together. Percabeth is the best, boy!

3. Is your favorite character still Percy?
YES! Seriously, this is a question? I LOVE THIS MAN. IF HE WAS REAL (I know *GASP*), HE WOULD BE MY BEST FRIEND!

4. Who is favorite new character that you met through this series?
There are so many great characters that were introduced; however, I can never make up my mind between Leo Valdez and Frank Zhang. They both deserve the Legendary Belts of Awesomeness!

5. Do you wish there were movies or a television show of this series?
Yes. I want to see the amazingness come out in my own home.

5.What was your least favorite and most favorite moment of this whole series?
Least: *SPOILER* In The Blood of Olympus, Leo's not a good friend as he does not alert his friends that he is okay and ALIVE!
Most: Throughout the series and especially in The House of Hades, I loved seeing Percy and Annabeth's relationship develop. I was shipping them from the start.

7. How was exploring Roman mythology, especially after studying Greek mythology in the Percy Jackson series?
It was a fun experience as I got to learn more about a different culture. I also got to learn about the different forms of gods and demigods who were chosen to be their descendants.

8. Were there any foodie moments?
In The Mark of Athena, before the main action occurs, some members of the group eat at a cafe. They eat a delicious sounding pizza that made me wish I were eating my lunch at the time. If only I could visit Rome. *wink, wink*

9. What food would you eat before you go into battle?
Before what I believe would be my last few moments in the weirdness (and awesomeness) of being a demigod, I would want to eat a hamburger. Just don't put me in front of Arachne while I'm eating.

10. After reading two book series of Riordan, do you still think there is something he should improve on?
His writing is beautiful, and like 100 dollars, I just want more!

11. Who would you recommend these books to?
Anybody. Everybody. And anyone who wants to survive Nicole's wrath and constant nagging. Honestly, I would recommend this book to those who like to read about Roman and Greek mythology.

12. What book in the Rick Riordan universe are you going to read next?
The Hidden Oracle as Nicole(who is graciously letting her younger brother experience this world of awesomeness from the comfort of her own bookshelf)says Percy has a cameo. I cannot wait to see him in all his seaweed glory!

14. What mythology would you like to see Riordan write next?
I would like to see him write an Aztec-inspired mythology. I have always been interested in this culture, and reading a fictional story and learning about their gods and rituals sounds right up my alley. Also, I would like to read more books from Master Riordan.

15. And lastly, why don't you have a Goodreads account so all your fans (who only joined this blog to hear about your life) could follow you?
'Cause I don't have a life.
(Come on! You could be Nathan the Lil' Bro.)
ACTUALLY, STOP, BRUH. THIS IS EMBARRASSING! JUST STOP!

- - -
So, that was the interview. I hope you enjoy reading not just my opinions, but also my brother's in a fun and cool style. Although I have read and enjoyed all of Rick Riordan's books, I find it fascinating to see what someone else thought about them. I could write and review books all I want; however, after a while, I get bored of doing the same old review. This makes it way more fun as I have to come up with interesting questions to ask my brother. I may have made him get a brain fart a couple of times and sometimes ponder on answers for hours, but it always fun to collaborate with my little brother.

Also, I am the oldest of all my siblings, which include a mixture of a human, cats, and a dog, so this makes me the coolest! HA! Wow, Nicole, you really know how to turn that smile upside down. And, to that I say...

Also, I have never seen this format done for a review so I think it is kind of unique. Well, until I find another person who formats another person's thoughts structured this way, at least.

Nicole: Thank you for reading, and I hope you enjoy!
Nathan: Peace. Watch out for the next review all about me!

Love,
newbookcats and Nathan, who is becoming a new member of the book community

Have you read any of Rick Riordan's books? How do you feel about his books, if you have? How well do you react to anything startling or, even, normal? Are there any spin-off series that, in your opinion, are better than the starting series? How do you feel about my brother joining me on my quest to find the best book in the universe? Do you think he should get a Goodreads account? Do you feel like answering any of the questions above? Chat with me in the comments below or on any of my social medias.