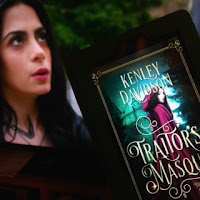 "Love that kills and destroys to protect itself is not love at all."
- Kenley Davidson, Traitor's Masque

Kenley Davidson retells a story of Cinderella, one of the most popular stories of all time, in Traitor's Masque, the first book in the Andari Chronicles. As it has been told before, Cinderella or Trystan, in this case, has two stepsisters, one dead father, one fully alive evil stepmother, and a charming prince ready to take her away with a drop of a shoe or a horse trinket. Unlike Cinderella, Trystan does not wait for her prince to come rescue her, but stumbles upon him one day when she has the freedom to ride her horse to Kingwood, a special spot her father and she used to visit. Once she gets lost and rides into an open field, she meets a mysterious man named Donevan who has a mysterious life, a bunch of stories, witty humor, and a way into Trystan's heart. But, this is before Tystan learns of a way to get her freedom through a betrayal of Prince Ramsey, or her Donevan, to put his older brother Rowan on the throne. She attends the Royal Masque to carry out her duty of betraying the current crown to get what she has always wanted, but now she does not know what she wants: a life with Donevan or a place of freedom away from her stepmother and sisters.

I was searching through my kindle library store, looking for a free ebook to pick out from hundreds of others when I just happened to stumble onto Kenley Davidson's Traitor's Masque. With most books I am not familiar with nor ones I hear no news about, I had my concerns. I did not want to waste my time on a four-hundred page book that might bore me to death with a young girl brooding over a boy who does not deserve her like almost every book I read. There is nothing wrong with fairy tale retellings, but sometimes, they can be super predictable or have a weak romance. Thankfully, this story had a great romance with lots of swoon-worthy moments and very little predictable scenes.

First, I will discuss the two main characters:

1. The main character who is modeled after Cinderella is Trystan Embrie Calbourne. I enjoyed reading about her since she is very much unlike the original Cinderella. Trystan is smart, inquisitive, stubborn, and thinks all day and night long. Most of the time she is making witty remarks, calculating every question someone asks and every move they make, and trying to survive while living with her rude stepmother and stepsisters. I was very surprised when Trystan had to cross dress so she could ride her horse due to not being allowed to wear pants. This is an unnecessary society rule that I am glad Trystan breaks several times to meet Ramsey, and associates herself with her middle name Embrie. She also has a lot of courage, bravery, and honesty, which I very much took note of and hope to carry more of those traits more into my life instead of always being shy and mostly hiding in corners.

2. Also, it was very nice to read about a different side of Prince Charming who is Ramsey, and is associated with his middle name Donevan due to his meetings with Trystan in this story. Prince Charming in the original Cinderella is a boring slump of porridge. He has no character and no personality but is charming as his name says. Ramsey is way more than charming, though, since he actually has a personality that causes him to have wit, great comebacks, intelligence, and kindness other than putting a shoe on a damsel and saving her from her family. Some of these acts of kindness he does are when he helps Trystan onto her horse, when he tries to get along with Rowan, and when he is being a better dancer than Rowan. I also really enjoyed how Ramsey is introverted, like me, and needs time to himself and space away from others. I extremely liked how Davidson wrote her characters to resemble regular people with extraordinary roles. They make trouble, a lot of mistakes, and have issues like normal people; I thank her for incorporating these imperfect characters into the story.

Even though I really enjoyed the characters, they were not the only parts. The romance is a big part of the story, and it did not disappoint. I was a big fan of it since the moment they both agreed on enjoying each other's company and separably agreed on their feelings. Their feelings exceeded the problems they had, especially when Trystan betrayed Ramsey and all the crazy things that happened. Also, the betrayal was a big part of the story, and was being introduced when Rowan was found out to be part of a conspiring group of people wanting him to have the crown instead of Ramsey. I was also very surprised when Trystan was at the palace to carry out her duty of a receiving a note, which worries her since she is committing an act of treason to put Rowan on the throne, and Rowan steps out of the blue to become the messenger. The whole time Ramsey and his council/makeshift family are planning this masque for the idea of finding a bride fitting for Ramsey, who can never find a girl since everyone in Andar thinks he is boring and ordinary-looking compared to his brother, Rowan is in another part of the country to reflect on his past few mistakes. When the party occurs, however, Rowan shows up, stealing the spotlight away from Ramsey. In the ideal moment of when Trystan is tired of attending the ball with her unbearable slippers, Rowan appears in front of Trystan to stealthily hide the note, which is later found out to be blank and meaningless since Trystan was only used as a distraction to get into the palace for Lady Isuara Westerby, in her shoe.

Even though I may have enjoyed the story a lot, there are some reasons on why I gave it four stars.
First, the beginning was super mega slow. Most of time, I will not mind the books that have slow beginnings to gradually introduce you to the story, but in Traitor's Masque, I had continually put the book down and had began forcing myself to read through the boring beginning. Once after a couple of chapters, which are about twenty to forty pages each, went by, I had no trouble at all and I kept on wanting to read it whenever I had a spare moment. Also, as I had written before, I thought it was predictable since I knew Rowan was the one scheming and wreaking havoc on the others.

I also really love the setting this story takes place in, too. As I have always been a fan of history and the medieval ages, Traitor's Masque seems to be a great fit for me. If there were a couple dragons, I would have thought I was reading Game of Thrones due to the book's setting and the formal language the characters spoke with each other. Since Trystan knows a lot, she must drink a lot of punch. She drinks punch and knows things.(Hahahaha! If you understand that reference, please let me know!)

Through all the good moments and the bad, I ended up really enjoying this book. Davidson wrote a great Cinderella-based story with a twist that could shock anyone from a mile away as long as they do not guess first. I cannot wait to continue on with the series, which I hope as great as this first one.

Thank you for reading, and I hope you enjoyed it!