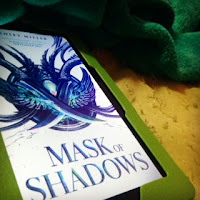 Foreword: I had received an ARC(Advanced Review Copy) of Mask of Shadows from the publisher to do a review on it. This kindness in no way affects my opinions or how I viewed the book. This review is to be honest and state my opinions on the matter.

"You shouldn't kiss people who could kill you."
- Linsey Miller, Mask of Shadows

Linsey Miller writes her debut novel, Mask of Shadows, a wonderful book full of twists and turns, a gender-fluid character, and a story anyone could enjoy. It all starts one day while Sal is out robbing and flirting with rich ladies, and Sal steals a flier that grants them admission to a prestigious event for becoming the Queen's Opal with just a price of a life. Unlucky for Sal, they gets in, and survives through attempted assassinations and kills their competitors for a chance to become the desired position of Opal. It all goes perfectly to plan with Maud becoming a trusty friend and Elise becoming a love interest to Sal until shadows start reappearing. Sal keeps telling everyone of the troubles Erlend may face, but no one believes due to the competition at hand and the Queen's loyalty of her people at stake. Killing is not an option anymore for Sal but a necessity to keep her new home safe as she ascends to becoming Opal, as long as she does not die first by the hands of one of her many enemies in and outside of the competition.

While I was reading Miller's Mask of Shadows, it reminded me a lot of Throne of Glass by Sarah J. Maas. It has the audition for becoming the ruler's assassin, the tasks that need to be completed when enrolled in the auditions, and swoon-worthy scenes of a romance with a noble-born that made my heart stop and made the story just right. Plus, this book has a kick-butt character who can rob people of what they want, disarm in a flick of a wrist, and kill while making it look like an accident. Now, enough chit-chat since it is time to talk more about the details and plot of the story.

First, Sal was the main character in Mask of Shadows, and is so awesome, period. This is all I really need to say to describe Sal, but there is a lot more to they than just that one word. I loved the aspect of a diverse character who is gender-fluid, which is a person who does not associate themselves with just one gender or no gender at all.(Even though I like seeing this diversity in a character, I am scared that I may be getting the pronouns wrong or may not be addressing Sal in the correct way.) Sal starts out as a thief in the beginning and makes their way to the top when they applies to become an assassin. I loved Sal's sass and ruthlessness when they goes to the beginning of the auditions and every time they talks to someone. I also really like how relatable Sal was, especially when she was running since I am also a runner and when she would try to play off things as cool or okay when they never really were while their temper was running wild. There were many characters in this book, but Sal stood out the most to me due to their diversity and how we are similar due to us wanting to be tough and having to hold back a lot of emotions to complete a goal.

Just because a book has a lot of action and suspense that keeps the reader guessing what is going to happen next, there needs to be a little romance for the reader to be rooting for. Mostly, there are many romances in a book, but in Mask of Shadows, there is only one: Sal Leon and Elise de Farone's. I loved this relationship and the sexy scenes between them. I loved how Elise told Sal how she does not like just men and also how their lessons were full of playful flirting. They were so cute; I wanted their relationship to work out so badly, but of course, bad things always have to happen that separate them. I was so heartbroken when Elise's dad took her away since Sal found out that Elise's father was conspiring against Nacea with Horatio del Seve.

Even though I enjoyed reading about Sal and their many adventures, I did not like how they got away with murdering a man so easily. In the middle of the auditions, Sal says enough is enough and decides to kill a long-time enemy of theirs named Horatio del Seve. Seve is just having a grand time with his late night tea and brandy when Sal kills him for abandoning and conspiring against Nacea when the shadows went there when Sal became the last member of her family and possibly her home country. Through the whole audition, Nicolas del Contes is spying on all the contestants and this event just happens to slip through the cracks. I am sorry, but this is not how the world works, even though this book is set in a different world, which is in a different universe with different rules. So, Miller has got me there. Also, I did not like how much concentration it took sometimes to read a passage. It is very easy for me to get distracted while reading, and a couple times I found myself reading without absorbing any of the information. I would have to reread sections to find out what was happening at that point in time. This is all I really disliked about the book, though, so that is why I gave it four point five out of five stars.

I especially loved the world Mask of Shadows is set in. I really liked how the world was built up and how little snippets of information coming from Sal's flashbacks or other people describing their past began to erect a new world I am ready to see more of in the future. The pacing was fantastic, and I loved how the story started in the middle of action when Sal was doing their usual job of robbing and making quick comebacks with people who were interesting enough to play a part in this story. I cannot wait for the second book in this duology, if I am correct, and any other books Miller puts out into the world.