Book Review: Between the Devil and the Deep Blue Sea by April Genevieve Tucholke 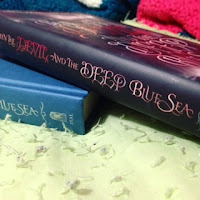 If one person were to go to a boring town, would they change the course of the future for that very said town? In Echo, a mysterious man named River West stays in the Whites' guesthouse. Violet immediately takes a liking to him the minute he walks into her life, but she does not know the full story of this man who shows up in a fancy car and has secrets trailing behind him. Then, disappearances and deaths start occurring due to River's "glow" that causes him to control people or to see an image, like a hologram, of a person or thing. This causes trouble to stir, Violet to question everything, and more mystery people coming to the Whites' home. Who knows what's real and who is creating the uproar in a regular boring town, such as Echo.

First, even though I love the cover, I did not love everything about this story. For one, the characters were not some of my favorite.

1. Violet White, the main character, is smart and passionate about her friends and family, but causes some shortages in her personality. She is a bit obnoxious due to the upbringing she had with her artist parents and their rich artist friends, but she goes through some character development thanks to River. He causes her to see a new way of life, such as when she sees her town as beautiful and when she smiles at the cashier after buying food. She also gets pushed around a lot and is very submissive when it comes to requests and orders. She never says anything when it is time to make a plan for a day's activities, even though she has a stubborn side that is mentioned due to Freddie's observations.

2. Also, it took me a while to get used to River's, or Williams Redding's, prescence since he is full of secrets and finds pleasure in the deaths of others. I always wanted to yell at him or throw the book across the room in rage. He used his "glow" on everyone including children in a graveyard, which is how they meet Jack, the child of the town drunk Daniel Leap. River, also, was not in charge of his ability, so sometimes, he got out of control and is accused of crimes that he may have not done or may have forgotten.

3. Sunshine and Luke are very much alike since they have a facade covering their true emotions of passion for their friends. Luke makes fun of Violet day after day and causes her to endure uncomfortable situations; even though, he is protective and is covering the the hurt of rejection from his parents with the pleasure of bullying the people around him. Sunshine does the same by unashamedly flirting with Luke in front of Violet and has no imagination; although, she changes after she saw River's "glow," which was Blue for her. She is smart, intellectual, and cares more than she lets on for her friends when a situation comes near.

4. Jack was my favorite character once he was introduced. He is smart, calculates every move, perceptive, and does it all as an innocent little boy. I did not like, though, how he was very naive when Violet had "requested" him to come to her when it was really Brodie.

I also really liked and was surprised by the plot twist. I and all the other characters were fooled into thinking River was the real villain and Devil of the story since there were mass murders and River may forget the occasional death. Then, the reader finds out Brodie, the brother of Neely, River, and countless other children created by their father's affairs, is the real villain of the story. The twist started out when a child was murdered near the train tracks and Brodie was revealed to be hidden in the woods behind Violet and Jack when they discovered the child. Violet walks Brodie to her house to call the police until she discovers Sunshine beaten by her parents, Jack unconscious on the ground, and everyone else gone. Brodie also has the "glow" since his father carries this gene throughout the family, but instead of needing to touch someone, he needs blood to do his magic, so to speak. Once Brodie is done, he leaves the Whites, Reddings, and Sunshine in a state of chaos in which River goes on a trip to get control over his "glow" and find Brodie before it is too late.

Although, I had really enjoyed the story and somewhat liked the characters, there was something I could not get past. As I had said in my summary of Between the Devil and the Deep Blue Sea, I found Violet to be immediately attracted to the mysterious boy next door, or River. She did not know him and what dangers he might bring into her life, and even when she has reasons to back up her suspicions of him, she would play it off as her imagination and went back to obsessing about River. Also, no matter how small and friendly your town/village/city is, why would one not lock their doors? While reading about the Whites and their home, I never saw them locking their doors. Anything could be out in the forest where they live, such as family members coming over or a serial killer with a taste for blood for his "glow," but the family and friends are ignorant about anything bad happening. Anyone could march into the house or the guesthouse and do whatever they want since the doors are unlocked. This also comes into play during inopportune moments when some of the characters need their privacy.

The story was paced very well and revealed little to nothing of what was going to happen next. I also really like Tucholke's writing style since it incorporated the Devil River brings up, the devil evil Brodie is, and the sea lining the town of Echo. The plot was weird and interesting enough that it kept me intrigued with the story. I am glad I had gotten to read the story, but the characters could use a tune-up.


Thank you for reading, and I hope you enjoyed!