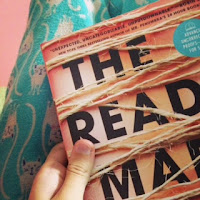 Foreword: I had received a free ARC(Advanced Readers Copy) of The Readymade Thief from the publisher to do a review on it. This kindness in no way affects my opinions or how I viewed the book. This review is to be honest and to have my own opinions on the matter.

Turning eighteen for a person means getting out of high school and going off to college to plan one's life before their eyes, right? Lee Cuddy definitely does not follow that life path since she is pushed into a world of art and survival due to a group of bachelors inspired by Duchamp's art. One day, she is betrayed by family and friends due to and ends up in juvenile prison where she soon escapes. Once she escapes, she is thrown into a world of mystery and unknown adventures in Crystal Castle after she gets recruited, and even after she escapes. While recruited, she feels like one of the many happy lost kids living there until she finds a hallway with jelly-eyed kids. She dashes out of there but not without returning to her old hobby of stealing something important to this whole corporation. On the run, she fears for her life and what would have happened if she had stayed in what seemed a safe haven for any kid who needed rescuing. While on the run, she finds a party unknowingly run by the same people who took care of her and now are chasing her where she meets Tomi. From Tomi, Lee finds out a lot more than she probably should know about this secret society of bachelors from auras in art to her doppelganger from only decades before. But, Lee does not know why she is involved and why she is so important, so she goes on an adventure to find the truth by living in other peoples' houses, stealing, and trying to survive .

First and foremost, I started The Readymade Thief while I was on a plane heading to California where I would later read literally nothing since the television was on the entire time. Instead of reading a book I felt I had to finish, I stayed up late into the night and into the early morning watching Seinfield, Friends, Forensic Files and countless other shows while resting from the day I had of touring and readying myself for the next. It was a bad idea to start it but I cannot change the past and stop myself from starting this book, which would later take me ten days to finish.

Next, I really liked how the characters were created and somewhat developed, even though this story was supposed to be a telling of Lee's becoming of age and Lee stopped developing by the time the mystery she was solving took over her life. I did have an issue with Lee's character, though. Lee is very trusting of others whom she does not know or whoever takes care of her and very naive. When she met the Station Master, she trusted him without a doubt and never thought twice about anything he did for her or said to her. It also occurred with Tomi once he first rescued Lee from a party he and his club of bachelors were hosting. Even after Lee found out that some of the closest people to her were always holding some part of themselves away from her, she still felt like she had to trust them for some unknown reason. I also did not like how Lee withheld the information about her baby from Tomi. I was yelling "Tell him!" at the pages, during the middle of the night.

Also, I was very interested in the parties and the club of the bachelors. I wish I could have learned more about the society and Crystal Castle instead of Duchamp and his artwork. The bachelors seemed to not have many reasons for the things they did, other than finding out the meaning of Duchamp's work and what it means for life. It also would have been nice to learn more about the society of bachelors' history. The reader gets a sneak peak into the last few decades but that is all.

While I was reading this book, I always felt some part of the story or something important was missing. It could be the boring lectures and parts of the book that did not hold my interest or it could be the writing style that did not grip me. The Readymade Thief did not hold my interest for a very long time or at least until I fell asleep. I wish I enjoyed Rose's debut book more than I did, but it just was not my cup of tea.

Thank you for reading, and I hope you enjoyed visiting this blog!