Book Review: Murder in Little Shendon by A.H. Richardson | One Murder Too Little, A Snail Slow Plot, and a Who Done It

Picture, if you will, a picturesque village called Little Shendon, suddenly caught up in dealing with a murder of one of its citizens - not a particularly well-liked one at that. Which makes it all the more intriguing because the list of suspects becomes very long. This tantalizing tale unfolds with delightful twists and turns to find out whodunit to Mr. Bartholomew Fynche, the murdered shopkeeper. Fear grips the community as the investigation slowly progresses. Everyone is interviewed; everyone is suspect! From the murdered man's housekeeper to Lady Armstrong, her staff and her nephew. Or could it be the shy librarian new in town? Or the defiant retired army major and his ladyfriend, the post mistress? Or perhaps the weird sisters who live on the edge of town? Then there is the couple who own the local inn and pub, along with the two Americans who are staying there? Even the vicar and his wife fall under the gloom of suspicion. Uncertainty, wariness, and terror reign as neighbors watch neighbors to discover the evil that permeates their upturned lives. No one feels safe in this charming little village. A.H. Richardson, noted author, places in your trembling hands a mystery murder that will keep you reading until you learn the details, uncovered by Police Inspector Stanley Burgess and his two amateur detectives, his friend Sir Victor Hazlitt and the famed Shakespearean actor Beresford Brandon. Scratch your head with them over the strange clues that turn up. Follow them as they tread carefully among the landmines that appear innocent as they lie hidden beneath the surface of mystery. Something evil skulks in this tiny country village. Who is the murderer? And why was this strange uncivil man dispatched in such a seemingly civil community? You are challenged to discover the culprit before the last few pages. And no fair looking ahead - it's the journey that proves the most enticing.

"Everyone is capable of committing a murder, given what they see as justified provocation."

Ever since I was very little, mystery novels have had a special hold over me. From reading a few books from the huge Nancy Drew series to my addiction to sail on my pirate ship to search for the best Young Adult mystery novel out there, I have always loved reading mystery novels, especially those involving a murder. Maybe, it results from my love for solving problems. It could also be my love for the dark side and Darth Vader that helped fuel my obsession with this too. Anyway, when the author and the publicist reached out to me to see if I would like to read this book, I immediately said yes, because who doesn't like a good mystery novel?

Usually when a murder takes place, there is a list of suspects for the police to glance over before checking the evidence. In Murder in Little Shendon, everyone is a suspect. When investigator Stanley Burgess calls his friends Victor Hazlitt and actor Beresford Brandon, they find that everyone has a motive. This makes the investigation even harder. However, does this make the investigation more interesting? Yes and no. Yes, it does because, and I will reference the quote I stated in the beginning("Everyone is capable of committing a murder, given what they see as justified provocation."), I thought it could be someone thought to be unlikely to commit a murder. I had to keep guessing as the story progressed as there were so many characters who I thought had a chance to murder Mr. Finch. Also, no, it does not make it more interesting as there is a mile-long list, which caused me to travel from England to Texas in a split second, forgetting the names of some characters. It was so hard to remember everyone and their reasons to kill. Also, I really did not enjoy finding out the killer as it sounded so obvious after learning about it. What made it more disappointing was that the characters kept saying that anyone could commit the murder so I had began to think that a sweet child licking a lollipop could have done it. Never trust a child.

Next, I loved the beginning of this novel! As I began to read, it drew me in immediately as this book heads straight for the dramatic scenes. A murder is the perfect beginning for this book, and kudos to Richardson to her amazing writing skills for descriptions and beginning a story. I could picture everything as the events unfurled. I just wish the middle and the ending held up its end as well. I write this because this book was super slow. Although having a slow story is not necessarily bad, it can keep me from reading a book, and this just happened to occur in this book. I never knew a mystery novel could be this slow and boring before I read this one. Murder in Little Shendon just needed a boost or some oomph to make it more than a little interesting.

Even though I disliked a lot of bits and pieces of this novel, I believe my own love of mystery novels boosted this book. I enjoyed guessing who had done it, and trying to wrap my mind around everything became one of my hobbies while reading this. I think Richardson's story is more about the experience and the journey through Richardson's words rather than the final result of knowing who the killer is.

*Received a free copy from Book Publicity Services in exchange for an honest review. 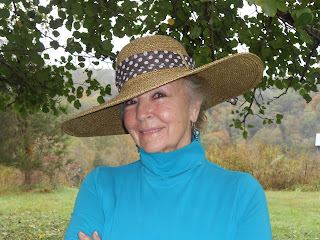 A.H. Richardson is an outstanding storyteller, whose unlimited imagination conjures up challenging and unforgettable characters, both good and evil, weaving them into a murder mystery full of suspects and unexpected twists and turns. Born in England (yes, she grew up on Agatha Christie stories), the author has always loved tales of murder and mayhem. In addition to the Hazlitt Brandon series, she is also the author of a series of children’s chapter books, the Jorie series, which includes Jorie and the Magic Stones, Jorie and the Gold Key, and Jorie and the River of Fire.

A.H. Richardson lives happily in East Tennessee, her adopted state, and has three sons, three grandchildren, and two pugs. She speaks four languages and loves to do voiceovers. She plans on writing many more books and hopes to delight her readers further with her British twist, which all her books have.

To learn more, go to https://ahrichardson.com/

Thank you all for joining, and have a great day!

What genre do you read love yet never seem to read? Do you enjoy mystery novels? Do you think you can guess who committed the murder? Is there anything about England that interests you? What are you searching for at the moment? Chat with me in the comments below or on any of my social medias.